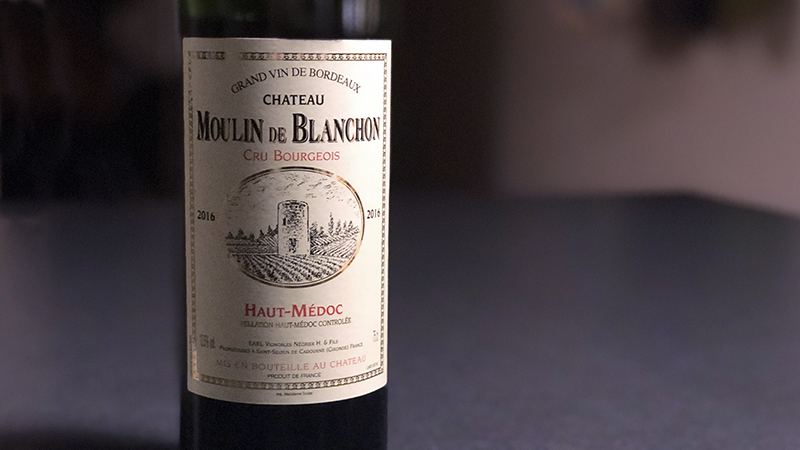 Burgundy and Bordeaux are the two giants French wine. In nearly every aspect — style, tradition, grape varietal, scale — they are opposites. As a small père et fils enterprise, Ansonia’s model fits far better with Burgundy, and we work with more than four Burgundy sources for every one in Bordeaux.

But the wines of Bordeaux continue to intrigue us, and we’re always on the hunt for a Burgundy-scale producer from the southwestern coast. And this spring we discovered a gem — rich, smooth, sophisticated red Bordeaux that’s also a startling bargain. We’re thrilled to introduce the 2016 Haut Médoc from Château Moulin-de-Blanchon.

Burgundy will always have our heart — but when then Bordelais turn out $25 wines at this quality, it become hard to ignore.

Moulin-de-Blanchon comes from the same winemakers who make our popular St-Estèphe “Fleuron de Liot.” It’s less highly classified than Fleuron, but it’s far more approachable young. Next to our other two delicious $25 red Bordeaux (2015 Grand Ormeau, 2015 Marchesseau), Moulin-de-Blanchon is classier and more serious — think an a cozy oak-paneled steak house rather than a bustling outdoor bistro.

Made from 50/50 Merlot and Cabernet Sauvignon, the 2016 Moulin de Blanchon is remarkably drinkable today. The nose shows raspberry jam, black pepper, fresh leather, and forest. The mouth is smooth and rich, with velvety tannins that are enticingly approachable already. The palate is long and inky with fresh fruits and delicate chalky finish.

Sear some steaks and open a bottle of this for guests — they’ll swear you paid twice as much.