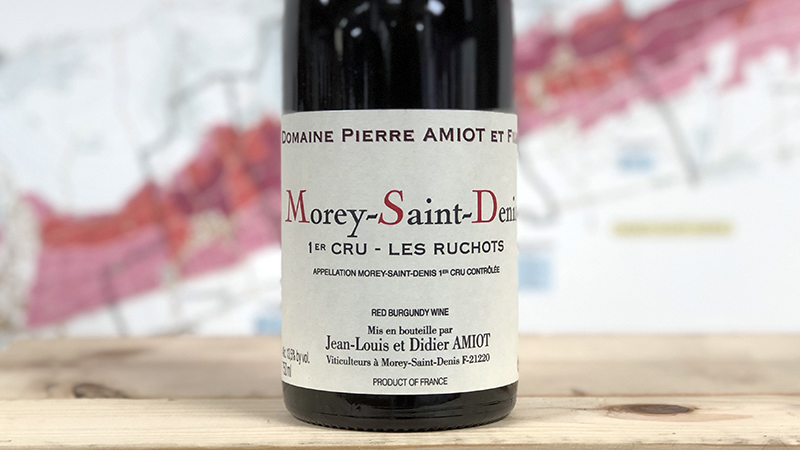 Morey-St-Denis is a tiny town. Home to only 680 people, its half-square-mile of vineyards produces a wide array of wines, ranging from simple Bourgogne to famous Grand Cru. We’ve found much to like across this small terroir, particularly in the premier crus from the Domaine Pierre Amiot. Today’s offer is for Amiot’s excellent 2011 premier cru from “Ruchots.”

The Ruchots vineyard lies a mere 10 feet from the Clos de Tart, an iconic Grand Cru vineyard in production for nearly a thousand years. While you wouldn’t mistake one wine for the other, it’s easy to see why most consider Ruchots the best premier cru in the town. It’s a wine of unusual depth and intensity for its class.

Clos de Tart deserves its praise and acclaim, but at $250 a bottle it’s nice to have a more affordable neighbor at the ready. For those in search of a special red Burgundy from an exceptional location, we offer “Ruchots.”

From an acre of vines, the Amiot family makes just 200 cases of this wine per year. Their vines, planted in the 1950s, produce concentrated, intense red Burgundy. Allen Meadows (Burghound) awarded 90 points to the Ruchots 2011, calling it “rich and fleshy.”

We opened this on Thursday night (as our Instagram followers may have seen) with steak-frites and cauliflower, and it was startlingly good. The fruit in the nose has softened, and now shares the stage with notes of woods, mushrooms, and spice. In the mouth it’s exceptional, showing unmistakable premier cru intensity, and a long, beautifully textured finish.

This wine is enough to prove that Morey-St-Denis is more than just a stop between Chambolle-Musigny and Gevrey-Chambertin. This certainly requires no further aging, but should hold up for another year or two if needed. From a small, well-located vineyard in an overlooked town, is nothing short of a well-aged gem.