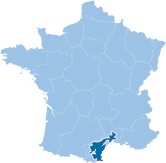 The Languedoc is a vast region that stretches across much of Southern France.  Most of its wine is eminently forgettable — produced in industrial quantities, and harvested and vinified the same way.  But there are places in the region, mostly in the hilly areas along its northern rim, with exceptional terroir that is capable of producing memorable wine.

We have two such producers in our portfolio.  The first is the Mas Foulaquier in Pic St. Loup. (Mas means farm in the dialect of Southern France. In the South they sound the “s;” in the North it is silent.) Pic St. Loup is the coolest place in the Languedoc, and its wines have a freshness that many wines from the region lack. The farming here is scrupulously organic and the winemaking biodynamic. Our second producer from the region is the Clos Bagatelle from St. Chinian, a town in the hills of the western reaches of the Languedoc. Its terroir is even more varied, with clay/limestone, schist, and sandstone soils supporting very good quality.