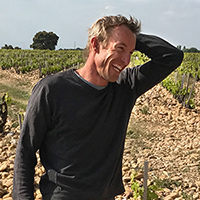 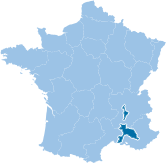 Christophe Mestre’s Chateauneuf du Pape bears the name “Cuvée des Sommeliers.” He is the most recent of four generations of vignerons in Chateauneuf du Pape.  Christophe’s father married a woman from another Chateauneuf vigneron family, and together they acquired small parcels from around the appellation, more than doubling the size of the estate, to more than  55 acres. With such a wide range of parcels, the domaine’s terroir looks like a list all the soils of the appellation.  More than a fifth of the soils are of clay/limestone with the famous galets roulés at the surface; but there is also hard limestone, calcerous sand, alluvial red soils, alluvial limestones, and brown sand.

From these diverse terroirs Mestre blends a single red and a single white.  The red is about 70% Grenache, with lesser amounts of Mourvedre, Syrah, and Cinsault.  The grapes are destemmed, and after fermentation the wine begins its élevage in concrete vats.  At 3 months about half the wine is moved into oak, most of which is large foudres.  A lesser amount goes into smaller oak barrels. Bottling begins at about 18 months.

The white Chateauneuf du Pape is vinified slowly, in cooled fermentation vats, and bottled after about five months. It has an early life of a few years (say 2 or 3) in which the fruit predominates; and when it is held for 6 to 8 years, there appears a new flavor and aroma profile of honey and flowers. 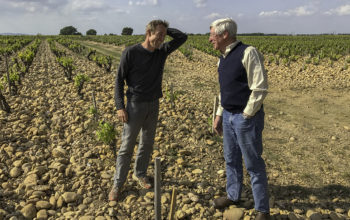 With winter weather here for the foreseeable future, we’re pleased to be well stocked on rich Southern Rhône reds. We have plenty of ideas from Séguret and… 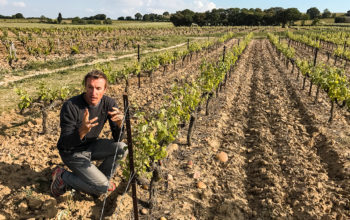 With a chilly Nor’easter hitting Boston this week, it’s finally feeling like Fall. We tend to drink according to dinner menu more than season, but there’s no…

Read More > about Rich, Cozy, Velvety Châteauneuf for a Nor’easter. $35

The 2017 vintage was an unusual one in the Southern Rhône. Most reds here rely on Grenache for a majority (or at least plurality) of their blend,…