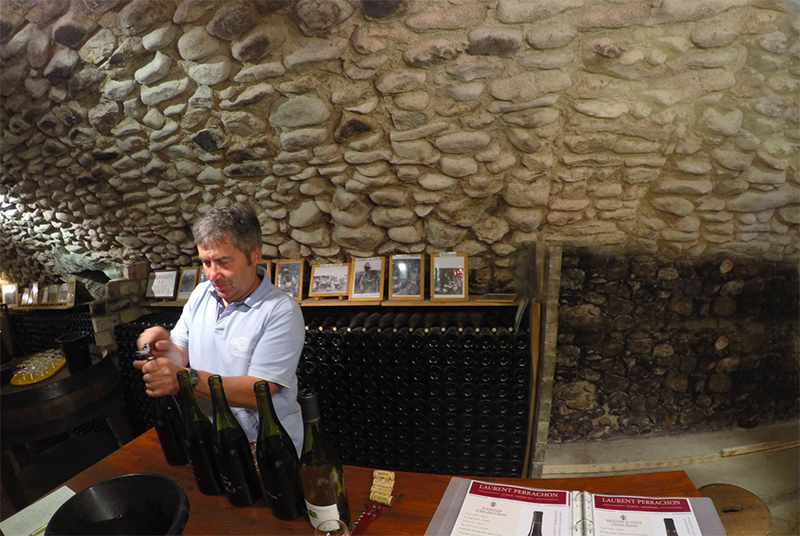 Beaujolais is the source of plenty of uninteresting wine. Fully a third of the region’s production is the Beaujolais Nouveau, a cheap insipid red rushed to market a month after harvest. But the rest of the region contains many undervalued wines, some in the same class of top wines from the north of Burgundy.

No Beaujolais source has more impressed us than Laurent Perrachon.” From meticulously cultivated old vines and careful use of oak, Perrachon creates remarkably delicious and refined red Burgundies. We’re not the only ones to notice; the domaine is among the only Beaujolais producers reviewed (and praised) by both Josh Raynolds (Vinous) and Allen Meadows (Burghound).

These are honest, complex, delicious red Burgundies; they just happen to be made from Gamay. If you like Beaujolais for its fruity, carefree character, this might not be your cup of tea. Perrachon’s 2015 Juliénas is dense, rich, and exceptionally long, with far more stuffing than you find in most $30 Pinots from Santenay or Maranges. The tannins are juicy and silky but sturdy, meaning this should develop easily for another 5+ years.

This wine’s best days are certainly in front of it. But with a hearty meal, a carafe, and a few enthusiastic friends, this bottle is a stunner. Bring a few bottles to Thanksgiving next month, and no one will guess it’s Gamay.